Night in the Islands

“Visit Greece without leaving Florida” is the slogan of the historic City of Tarpon Springs well-known to locals and tourists as the “Greek Village.” On the famous Dodecanese Boulevard and Athens Street, a summer feast is set up, an outdoor celebration with live orchestra, Greek music, singing and dancing. The streets are closed to traffic and the local Greek restaurants have set up tables and chairs for patrons sit and enjoy delicious Greek dishes, with the favorite item on the menu being the well-done souvlakia. The summertime feast is called Night in the Islands.

“It is an amazing opportunity for good Greek entertainment, delicious appetizers, and dancing,” Helen Kariofilis, who is also President of the Athenian Society of Florida “Attiki,” told The National Herald. “You spend an excellent night with friends, without spending much. I wish we had such Greek nights, more regularly.”

Mrs. Kariofilis attended the event with Yiannis Bralis, vice president of the Athenian Society, and many others who enjoyed themselves well into the night. “We must continue these Greek events, which are a good opportunity to show to the non-Greeks, the customs and traditions of our country,” she said.

The previous Night in the Islands was held on July 15 and the next one will take place on Saturday, August 5. Before the big feast begins, free Greek dance lessons are given there, next to the beach, by George and Maria Kouskoutis, of Tarpon Springs’ Levendia Dance Group.

The event features live music by Ellada, an exciting band composed of three of the most accomplished Greek musicians in Florida—Leonidas Zafiris on bouzouki; Elias Poulos on vocals; and Dino Theofilos on keyboard. The talented band performs classics from a rich repertoire including slow songs and dance music, bringing most of the crowd to the outdoor dance floor.

Phil the Thrill is a local Greek DJ who frequents Tarpon Springs and is always playing the latest HOT CLUB songs from Greece. “This is a great opportunity to listen to live music with by buddies form Ellada, then afterwards bring the Party into one of the Clubs and Keep going as they do in Greece!” says Phil Gaitan.

“Can you imagine my in-law who comes from Brazil, learned Greek dances last year right here on the street?” said Sophia Kambitsis, who attends every year with her husband and their friends.

The Greek mayor of the city, Chrysostomos (Chris) Alahouzos, previously served on the Board of City Commissioners in the capacity of Vice-Mayor and Commissioners and is a long time resident of the City of Tarpon Springs. He supports the Night in the Islands events.

Tina Bucuvalas, who is responsible for the Night in the Islands and other cultural events, is always present on these Greek nights, walking around to make sure everything is running smoothly on behalf of the City of Tarpon Springs.

Bucuvalas had some experiences with similar events in Miami and it was her own idea to organize the Greek feasts in the middle of Dodecanese Boulevard. Greek-American U.S. Representative Gus Bilirakis visits the event often with his wife and children. 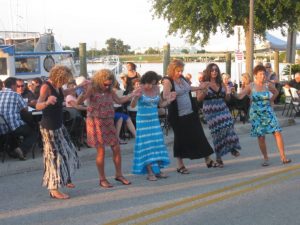